The long-awaited Phnom Penh-Sihanoukville Expressway has opened, cutting down travel time between the two cities from about six hours to two.

The long-awaited Phnom Penh-Sihanoukville Expressway has opened, cutting down travel time between the two cities from about six hours to two.

It wasn’t that long ago that being able to travel between Phnom Penh and Sihanoukville in two hours was unimaginable. That was until the Phnom Penh-Sihanoukville Expressway opened. This game changer has cut transport time from between five and six hours along National Road 4, depending on road conditions and traffic, to about two hours. That’s quite a difference! The 187km-long highway opened in October and passes through Kandal, Kampong Speu and Koh Kong provinces. It’s been quite a feat in the making given it’s Cambodia’s first expressway. Mass educational programmes have been rolled out on how to use the road properly for a start.

The $2 billion, Chinese-funded road has two lanes in each direction, with an emergency lane on each side. Driving along the Phnom Penh-Sihanoukville Expressway in the wrong direction is strictly forbidden. While that’s the case across Cambodia, anyone travelling along the nation’s national roads knows motorbikes and trucks hurtling towards you head-on is a common occurrence. However, with an enforced minimum speed of 60kmph and maximum of 120kmph, sticking to this rule is pretty much a case of life or death.

Farmers have also been at the forefront of awareness campaigns. During construction of the road, they were commonly reported cutting the fence so they could cross the highway with their cattle. Not a wise idea with vehicles zooming along at 120kmph. In mid-October, traffic police also had to issue an urgent warning for motorists not to stop to take selfies on the road. This followed a handful of cases that came close to causing accidents! 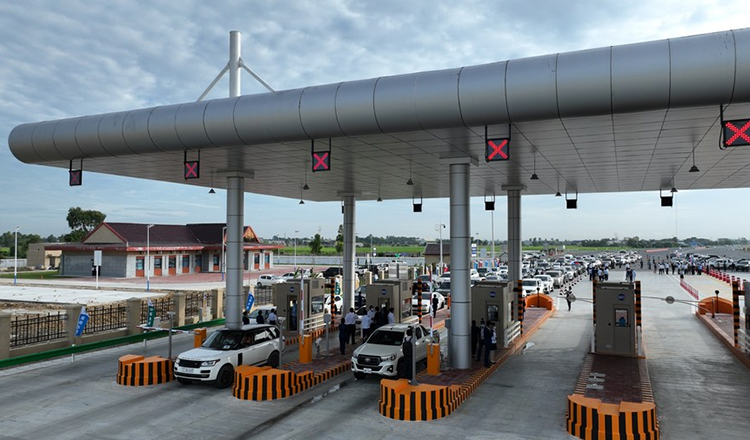 October saw the “soft opening” of the expressway, with drivers given free access. However, from November, tolls have been introduced. The Ministry of Public Works and Transport is giving motorists a 20 percent discount on the fares until October 31, 2023. Fares are calculated depending on vehicle type and distance travelled, ranging from $0.064 to $0.32 per kilometre.

If you’re travelling in a car with up to seven seats or a motorbike with cylinders greater than or equal to 500cc, it will cost $0.064 per kilometre. This means, to drive the entire 187.05-kilometre stretch between the capital and Sihanoukville, it will cost $12 – a bargain considering it now makes a weekend trip to the coast or islands feasible! Just don’t forget to fill up the tank before embarking on the journey as, currently, there’s. lack of petrol stations along the way.