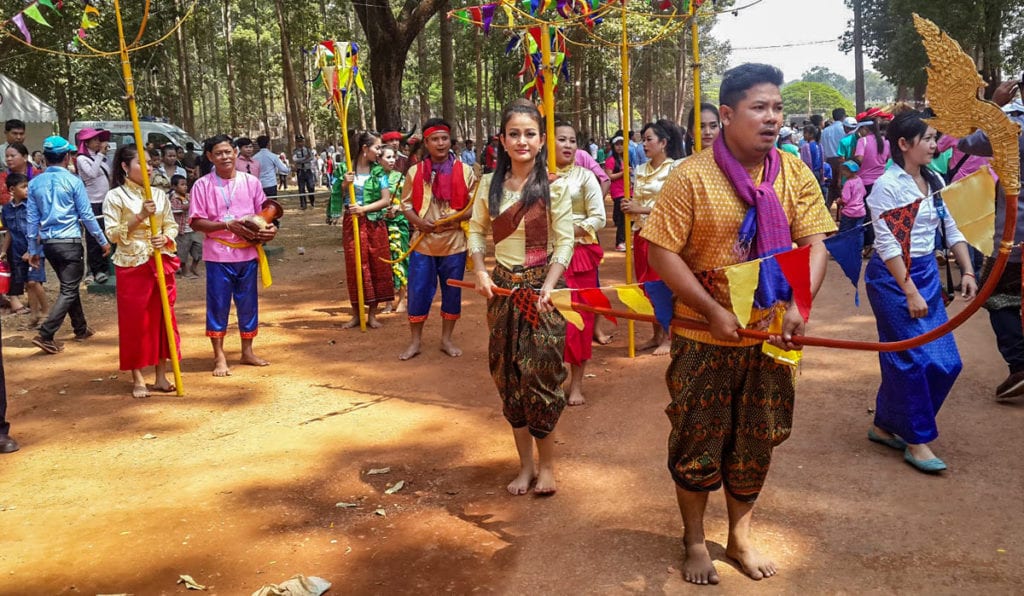 Khmer New Year is the biggest festival on the Khmer calendar – and there are a lot, so prepare yourself for a solid three-day celebration countrywide. The date of Khmer New Year varies slightly each year but usually falls around mid-April, to mark the end of the harvest season, and takes in three days of celebrations.

What is the Cambodian New Year Called?

“Susaday Chnnam Thmei” is a term you’ll commonly hear ringing through the air during Khmer New Year. The Khmer greeting for “Happy New Year” is usually accompanied by a bucket – or several – of water and talcum powder being hurled your way – but that’s all part of the lively festivities that mark Cambodian new year.

What Happens During Khmer New Year?

If you happen to be in Cambodia during Khmer New Year, then follow in locals’ footsteps and trade in the city for the provinces and celebrate local style. As a major holiday that spans three days, most Cambodians will take the week off work and head to their homeland to spend the holidays with family. This means the capital empties out and the majority of shops, restaurants and attractions shut during this time. If you plan on staying in the city, a bit of pre-planning is advisable.

In contrast, the countryside comes to life as people flock home to celebrate. Other lively spots to mark new year include Siem Reap and Battambang, where official celebrations usually take place. These include parades, traditional games, water fights, entertainment and other activities. Expect to get wet – very wet – so, unless you have something super water tight, leave your camera and phone at home. The celebrations in 2022 were especially heightened as this was the first time in two years Cambodia was able to officially ring in new year. The government cancelled the previous two celebrations due to Covid-19.

As well as trawling the streets in trucks seeking out people to hurl water and talc at, the three days of Khmer New Year are packed with traditional activities and rituals with roots that stretch back centuries.

The first day of Khmer New Year sees people leave fruits and other foods and drinks – cans of Angkor beer and Coca Cola are a common sight! – in front of their houses as an offering to the gods. It is believed that new gods and spirits will enjoy them and bless their homes, bringing good fortune for the coming year. People can also be seen ferociously cleaning and decorating their houses. In the morning, food is prepared and taken to the temples as offerings to monks. In return, they receive a blessing. Throughout the day, children can be seen playing traditional games in fields and playgrounds.

The main activity on the second day of Khmer New Year is gift-giving. People visit relatives to give presents to parents, grandparents and elders. It is also a time when money, food or clothes are donated to the less wealthy. In true Khmer tradition, feasts of food are involved with families enjoying lavish lunches and dinners together. In the evening, people often visit the temple to receive more blessings.

Water features heavily in the last day of Khmer New Year, when revelers bathe statues of Buddha and wash their parents, grandparents and elders with water blessed by monks. This is believed to bring them health and long life, while washing away past sins.

Don’t be shy and join in the fun. Just remember to dress respectfully if you plan on entering temples. It’s also worth noting that if you plan on being in Cambodia during Khmer New Year, transport fills up quick, as well as accommodation in popular holiday spots, such as Kampot and Siem Reap.

What Are the Most Important Holidays in Cambodia?

Along with the Cambodia Water Festival (Bon Om Touk) and Pchum Ben, Khmer New Year is the biggest event in the packed Cambodia festival calendar.

Other Water Festivals in Southeast Asia

Khmer New Year is closely linked to and celebrated at roughly the same time as Songkran in neighbouring Thailand, Laos and Myanmar.