Pchum Ben Festival may sound like an episode reserved for the plot of a horror film – it’s when the gates of hell open and starving, tortured souls spend 15 days roaming earth in search of food – but it’s another key event on the Khmer calendar that gives good cause for celebration.

When Is Pchum Ben in Cambodia?

While the festival stretches 15 days, which change each year but tend to fall in late-September to mid-October, it is the final three that are taken as a public holiday. This is when Cambodians generally return to their homeland to celebrate with relatives.

What Does Pchum Ben Stand For?

Pchum Ben – also known as Ancestor’s Day – is when Cambodians commemorate the last seven generations of deceased relatives who, according to Buddhist religion, are unable to pas onto the next life. During the festival, the gates to hell are believed to be thrown open to allow these spirits to roam the land. In another twist, they’re starving and they only have pinhole mouths to feed their hunger through.

What is the Pchum Ben Festival?

In line with the belief that if left unfed these starved souls will cast a curse upon their living ancestors, Cambodians dress in the traditional Buddhist mourning colours of black and white and attend pagodas – traditionally seven – to give offerings to monks. They then pass it on to the hungry spirits. At the pagodas, relatives say prayers to the dead and receive a blessing before returning home to enjoy the feasts that form the centre of all Cambodian festivities.

Early risers can also catch a popular Pchum Ben tradition being carried out. At the crack of dawn, locals hurl bay ben – balls made from sticky rice and sesame – into the air as another medium to appease their ancestors’ hunger.

If you’re in Cambodia during Pchum Ben it’s worth noting that the majority of the major hubs, such as the capital, empty. The majority of shops and attractions are closed, and those that remain open operate on skeleton staff. Transport and hotels in popular tourist spots also fill up quick, so booking ahead pays off.

When is Pchum Ben Day?

Other Festivals in Cambodia

Pchum Ben is one of a number of festivals in Cambodia, including Khmer New Year and the Cambodia Water Festival. Other noteworthy festivals include the Royal Ploughing Ceremony. 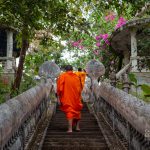